We tend to operate with an implicit Darwinian cynicism when it comes to the history of ideas—if someone or something has been consigned to the dustbin of history, there’s probably, we suspect, a good reason for it. At the very least, we figure, theology seems to be doing just fine without the contributions of this neglected genius, so he can’t be all that important.

There are of course any number of holes in this train of reasoning, which probably become obvious enough simply by making these implicit musings explicit. But let’s focus on the last one. Is it really the case that our theology today is “doing just fine”?

There is not a shortage of books arguing against atheism propositionally. But what about trying to understand it on an emotional and existential level?

Protestantism today has an idolatry problem. And by that I do not mean what countless Protestant preachers on both the left and the right can be heard thundering from pulpits every Sunday—that we have embraced the idol of Mammon, or of the State, or of personal freedom, or of gluten-free dieting, etc. This may all be true enough, and yet when we seek to make the pervasive biblical warnings against idolatry relevant to the modern world in this way, we manage to miss a central strand of the Bible’s teaching on the subject: that we can make an idol of Yahweh, the Holy One of Israel.

We are pleased to announce that we have updated and revised two of our earlier publications, For the Healing of the Nations and For Law and for Liberty. You will find descriptions of each work below. END_OF_DOCUMENT_TOKEN_TO_BE_REPLACED

We are pleased to announce the publication of the third installment in our Davenant Guides series, Natural Law: A Brief Introduction and Biblical Defense. Davenant Guides seek to offer short and accessible introductions to key issues of current debate in theology and ethics, drawing on a magisterial Protestant perspective and defending its contemporary relevance today. In this volume, David Haines and Andrew Fulford, Canadian Reformed scholars, collaborate to explain the philosophical foundations of natural law, clear up common misunderstandings about the term, and demonstrate the robust biblical basis for natural law reasoning. In doing so, they help bring clarity to recent debates about how Protestants can understand the role of reason, the moral knowledge and ability of unbelievers, and how Christians can engage the public square.

“Natural Law: A Brief Introduction and Biblical Defense could not have come at a better time. One does not need to be a rocket scientist to see that the increasing secularization of Western culture has lead to ethical, theological and behavioral chaos and relativism. Christians must speak clearly and convincingly about the messy issues of our day, but they, especially Protestants, are ill-prepared to engage the world of ideas without citing the Bible. Among other things, this implies that Christians should be laboring for a theocracy, but this is not what is needed and the state must have some sort of guidance to carry out its mission of punishing wrongdoing in Romans 13 without the scriptures. The existence, nature and knowability of natural moral law is what meets these needs.

Fulford and Haines have provided an outstanding work that must get a wide readership if Christians are to re-engage the public square thoughtfully and appropriately. They follow a carefully developed order of presentation in this book. Before giving what may be the best recent biblical defense of natural law theory, they rightly are concerned to make very clear exactly what natural law is. Refreshingly, they ground natural law in solid metaphysical treatments of God’s relation to the natural law and in the metaphysics of the creation within which natural law makes sense. This is followed by unpacking the claim that natural moral law is knowable by human beings. Given this treasure-trove of background, the biblical defense of natural moral law is clarified.  I am excited about this book! And I thank God for Fulford and Haines who took great effort and much time to serve the church with this resource.” 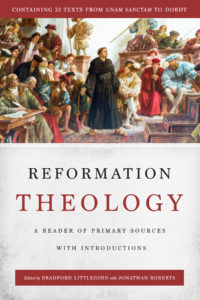 On October 31st, The Davenant Institute published Reformation Theology: A Reader of Primary Sources with Introductions. Edited by Bradford Littlejohn and Jonathan Roberts, this work reflects the clarion call of the Protestant Reformers, “Ad fontes!—Back to the sources!” for our own generation. Just as they recognized that renewal of the church in their era depended upon a clearer understanding of the church’s past through the writings of its greatest early theologians, so renewal of the church in our era depends on grasping anew what the Reformation was all about, why it happened, and why it still matters. The best way to achieve that, we believe, is through reading the primary sources. END_OF_DOCUMENT_TOKEN_TO_BE_REPLACED As we celebrate the 500th anniversary of the Reformation, many Protestants, whether in the pews, the pulpit, or the academy, are apt to feel a bit uncertain about just how enthusiastically they can celebrate the Protestant doctrine of the church. After all, isn’t this doctrine the weakest link in Protestant theology, as modern-day Catholic apologists charge, and insecure Protestant theologians self-flagellatingly repeat? In The Davenant Institute’s newest publication, People of the Promise: A Mere Protestant Ecclesiology, our contributors argue, on the contrary, that the Reformers’ radical re-thinking of the definition of the church is one of the Reformation’s greatest treasures. Not only is “mere Protestant” ecclesiology firmly in concert with the multifaceted biblical witness, but it is also manifestly in accord with natural reason and the lived experience of Christians throughout the ages. This volume seeks to honor the Protestant heritage and encourage Protestant Christians today by remembering, reclaiming, and critically reflecting upon the relationship between the gospel promise and the community which it calls into being. END_OF_DOCUMENT_TOKEN_TO_BE_REPLACED

This article is taken from the first issue of Ad Fontes: a Journal of Protestant Resourcement. Subscriptions to the print edition are available for $5/month. This is one of two articles in our inaugural issue and is written by Bradley Belschner. Belschner is a systems analyst at Emsi, a determined generalist, and an enthusiast of Reformation theology.

Throughout Christian history there have been four main ecclesiologies:

The most important distinction above is sacerdotal vs. evangelical. Sacerdotalism refers to the role of the “priest” as a spiritual mediator between God and man, and also the notion that bishops represent the apostles by virtue of apostolic succession. In this view the clergy do not exist merely to promote good order in the church; rather, their offices are imbued with unique spiritual power that lay Christians do not possess. The church is conceived of as an institution, and the boundary of that institution is defined by the clergy. Roman Catholics and Eastern Orthodox affirm different versions of sacerdotalism, since the former insists on a supreme Roman bishop within the clergy, but either way both churches share the same fundamental belief in the mediatorial role of the clergy. END_OF_DOCUMENT_TOKEN_TO_BE_REPLACED